Norse mythology speaks to me the way no other does. I adore the visuals often associated to it: cold winter landscapes under the light of the Aurora; glorious, decorated wooden halls shinning among the snow; men and women adorned with runic tattoos feasting and sparring till the final battle at the world’s end.

And of course the Valkyries. 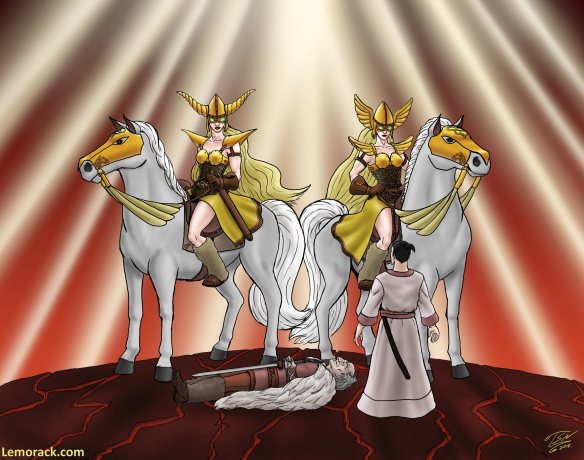 Topping the list of my most beloved groups of mythological women, the Valkyries were tasked with selecting and guiding the souls of the greatest warriors to fall in battle to the halls of Valhalla. They are also destined to ride into battle come Ragnarök. And I don’t envy the fire-giants at the front of the charge that day. Well, okay, maybe I do a little…

My first ever contact with these amazing women was through a rather unlikely source: a children’s cartoon called Samurai Jack, the story of a Samurai warrior wandering the landscape of a cyberpunk future trying to find a way back to his time, so that he may defeat the evil being, Aku, that now rules the world. Along his travels he finds himself in the long destroyed home of the Norse, where he hears the calling of an ancient voice. In the depths of the mountain he comes face to face with the source: a giant Lava Monster.

Jack learns the identity of this strange creature to be that of an old Norse warrior cursed, by the same evil creature that sent him to the future, to forever be stuck in his new rock body, never to join his fallen comrades in Valhalla. He explains to the Samurai that the only way for him to be accepted to the side of the gods is to fall in glorious combat. Hearing the monster’s plea Jack agrees to fight him.

The moment where Jack draws his sword and calls out to the monster to prepare himself was a really powerful moment for my young childhood self. It was, you see, only a few episodes earlier in the season that Jack teamed up with a warrior woman to hunt down a magic gem that could help him return to the past. Alas, as the gem was finally within his grasp the woman revealed herself to be Aku in disguise. Jack’s faith in the good in all people is his only real weakness, and he is taken advantage of more than a few times throughout the show. And even after experiencing a betrayal like that, he is still willing to take the monster at his word with no way to be sure of his intentions. And the payoff is truly spectacular.

After a hard fought battle Jack strikes the monster down, and the events that follow became ingrained in my mind ever since. 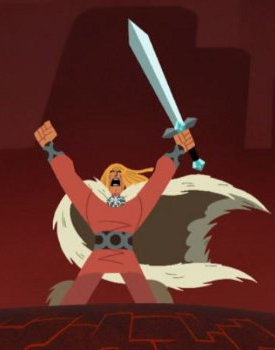 In a glorious burst of light the warrior regains his mortal form, shouting at the top his lungs: “I am FREE!” Shortly after, however, the years he spent in his kingdom of rock all catch up to him, and he collapses on the ground an old man. Jack rushes to his aid, but with a smile on his face the warrior asks only that Jack hand him his sword. With his final breath he thanks his savior.

Then the skies burst open and a heavenly ray of light shines down at them. From within the blinding radiance two golden armored women descend on white horses, and land on the ground before them. The sight of those two magnificent figures framed in the light will forever be the most powerful image I have ever seen. And without a word spoken, Jack watches as the Valkyries carry the warrior back with them to the Hall of the Gods.

Simplistic and dumbed down as it was, this was my introduction to Norse mythology. And what an introduction it was. 15 years later I still tear up at the very thought of that episode’s final 5 minutes. So to pay tribute to one of my defining childhood experiences, I made my own recreation of that impactful scene.

Check out the Timelapse here: